Escape the business of the city and take on this new cycling challenge to explore the attractions the Falkirk area has to offer.

The #Falkirk25 is the ultimate route for cyclists in Edinburgh and Glasgow looking for a new challenge that takes them out of the city. Set off from either city and cycle along the canal towpath, for approximately 25 miles to The Falkirk Wheel where the Forth & Clyde Canal meets the Union Canal. The challenge continues if you’re feeling keen to head back home or continue onwards to the other city. Alternatively, Falkirk’s well connected public transport services can take you back too!  Cyclists can either take the challenge and cycle in one go, or make a day of it and enjoy the history, wildlife and sights of Central Scotland’s two canals which meet in a very special place.

Glasgow- The Falkirk Wheel = The Forth and Clyde Canal 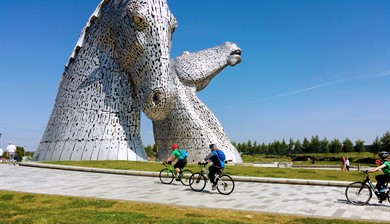 Cycling at The Kelpies

What’s it like to cycle on a canal towpath?

Canal cycling is an unrivalled experience for cyclists of all levels, from children to seasoned peddlers. Designed to transport goods safely and easily, these industrial relics now provide bikers with miles of flat traffic-free cycle routes as well as the opportunity to confidently cycle through some of Scotland’s best scenery. Restored to suit cyclists, these cycle paths offer stress-free serotonin boosting joy for peddlers of all ages and towpaths are now valued as being one of the most enjoyable ways to get around the countryside or cities. 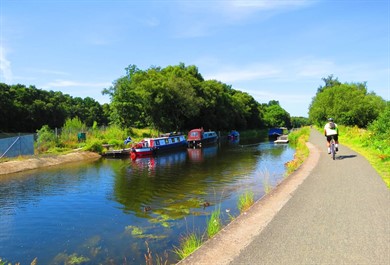 Cycling from Edinburgh on the Union Canal

The Union Canal begins at the Lochrin Basin in bustling Fountainbridge but you can join from any point on the canal. From here you’ll traverse through beautiful Ratho, Broxburn, then Linlithgow, before finally cycling down to Falkirk. Travelling along the canal to Falkirk is to experience a real slice of history. Beautifully restored as part of the Millennium Links Project, The Union Canal was re-opened in 2001. As Scotland’s only contour canal, the original course curved around the hills so it didn’t need so many locks. Now it makes for a fantastic direct and easy route from Edinburgh to Falkirk.

When the Union Canal was originally built, the Laird of Callendar House, William Forbes Callendar refused to let the canal cross his land, so canal builders had to create a 2,070 ft. tunnel to make sure it didn’t cut through or ruin the view from his famous home. The Falkirk Tunnel is one of the most memorable parts of the route, illuminated by atmospheric lighting, casting shadows on the stone ceiling.

The Union Canal originally contained 62 stone bridges, each one numbered in the keystone. Now there are 88 bridges, and all are worth admiring – see if you can spot the new ones hidden in amongst the traditional old ones!

Along the Union Canal you’ll also encounter some amazing aqueducts. If you’ve got a head for heights, you’ll love the trio of Aqueducts on the Edinburgh end of The Union Canal. Designed by the renowned 19th century civil engineer Hugh Baird, these aqueducts are stunning relics from the bygone days of the industrial revolution. The Slateford Aqueduct carries the Union Canal over the Water of Leith via eight arches spanning 500 feet, while the Almond Aqueduct successfully caries the Union Canal over the River Almond. The Avon Aqueduct is the largest aqueduct in Scotland, spanning 12 arches. There’s no need to be worried about navigating your bike over these tall structures; the towpath code requires all cyclists to dismount and walk over them.

If you can, pop by the Canal Museum in the former stables in Linlithgow, open 1.30pm-4.00pm.   You’ll be amazed by the brilliant collection of artefacts and information put together by the LUCS members who lovingly maintain this brilliant time capsule. 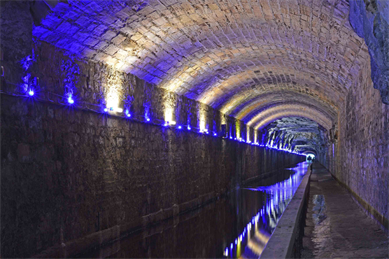 Cycling from Glasgow on the Forth & Clyde Canal

Opened in 1790, the canal was so named because it linked the Firth of Clyde with the Firth of Forth. A flight of eleven locks once connected the canal to the Union Canal, but now they have been brought together by the stunning Falkirk Wheel. You can catch the full history of the canal at the Clydebank Museum.

But it’s not just the Union Canal that has all the aqueduct fun, as the Kelvin Aqueduct carries the Forth and Clyde canal over the River Kelvin and was once Britain’s largest.  This four span aqueduct offers stunning views of the River Kelvin below.  Before you reach the Falkirk Wheel you’ll also pass through the towns of Kirkintilloch, Clydebank and the northern suburbs of Glasgow.

To find out more about the canal and the communities that live on it, we recommend a stop-off at the Auld Kirk Museum in Kirkintilloch, situated in a stunning Grade A building.  There’s even a chance to see some rare Roman artefacts from the local area. The museum’s current exhibition is entitled 20 Women, and is open Tuesday- Saturday.

The Forth and Clyde canal also provides easy access to the Roman Antonine Wall World Heritage Site, and from Auchinstarry Marina, you can hop-off your bike and take a walk to see the mounded structure of the wall which is still visible. You can also visit Roughcastle Fort which is just a ten minute walk from the Falkirk wheel.

Tempted to get out on the water? The Forth and Clyde Canal Society work to preserve the canal and champion restoration and development. As well as this, they are determined to get as many people as possible out on the water. Based in Kirkintilloch, their three boats bring people out onto the water wherever possible. For more information on experiencing the canal, click here.

Feeling adventurous? On this route you’re in prime position to see The Kelpies with just a short detour. Created by Andy Scott, this beautiful horse sculpture encapsulates the history of the area and Scottish mythology beautifully.  The famous Clydesdale Horses and local celebrities of the area Baron and Duke, are fashioned into Kelpies, the shapeshifting horses that pulled travellers’ boats across the water, in the same way that Canal horses pulled boats along the towpath. There’s no way to avoid them on the route, and if you’re as entranced as we’ll expect you to be. We definitely recommend taking a detour to ride around the biggest horse sculpture in the world and if you have time join a tour which take you inside one of the Kelpies head. 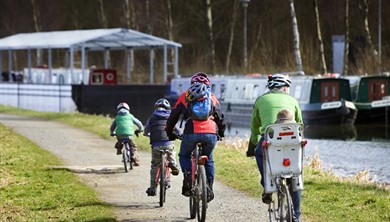 Forth & Clyde Canal by Peter Sandground

Both canals boast a wide range of wildlife. Thanks to rewilding projects and the fantastic efforts of canal users to keep these spaces a clean and welcoming environment, nature and wildlife thrives.  You have the possibility of spotting swans, kingfishers, otters, herons and other animals. Just keeping your eyes peeled on your path is all you have to do to be in with the chance of spotting a canal celebrity. 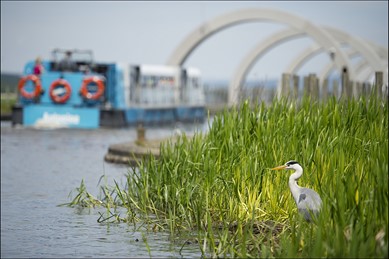 Wildlife at The Falkirk Wheel

Keep Right On til’ the End

If you’ve travelled from either city to Falkirk you’ll be greeted by the stunning Falkirk Wheel. This twenty-year-old rotating boat lift  connects the Union Canal to the Forth & Clyde Canal. And, at this point, it’s the perfect opportunity to enjoy the full experience of the Falkirk Wheel. Experience the 60 minute journey and sail into the sky 35m above the Union Canal. After moving along the aqueduct and through the Roughcastle tunnel, you’ll be taken to the beginning of the Union Canal and then you’ll descend to the start point, returning to the visitor centre. The Falkirk Wheel hosts many activities for people of all ages throughout the year including paddle boarding, boat trips, mini golf, waterzorbing, bumper boats and peddle boats. Book your activities at The Falkirk Wheel here. 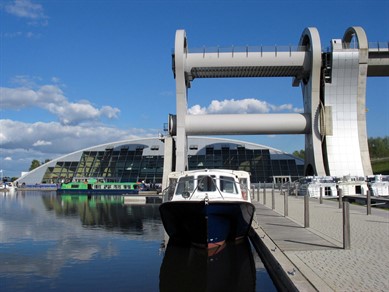 Canal Boats at The Falkirk Wheel

Canal Communities are fostered by courtesy and consideration

The canals are much loved by everyone, not just cyclists. Scottish Canals offers some key advice on ensuring the canals continue to be a great place for everyone and you should follow the towpath code. 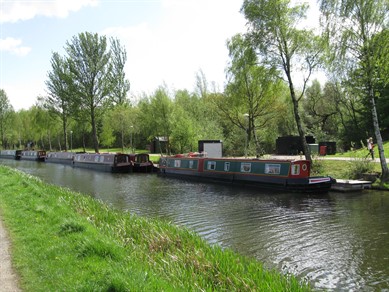 Boats on the Canal

Indeed, canal paths have been restored with cyclists in mind, but risk is involved with all cycling ventures. Canal path surfaces may be affected by weather conditions and it is unadvisable to cycle in strong winds along narrower parts of the route.

Please exercise caution when planning a #Falkirk25 trip. Only attempt these routes if you and all the other members of your group are at a reasonable level of fitness.

If you’ve taken on the mighty Falkirk 25 it may now be time to peddle your wheels further. Check out Sustrans Route 754 for the next challenge. Why not fit the two routes in one day? Now you’ve got no excuse for not hopping on the Falkirk Wheel find out more about cycling in the Falkirk area here www.visitfalkirk.com/cycling 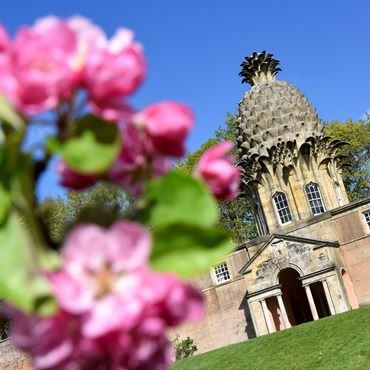 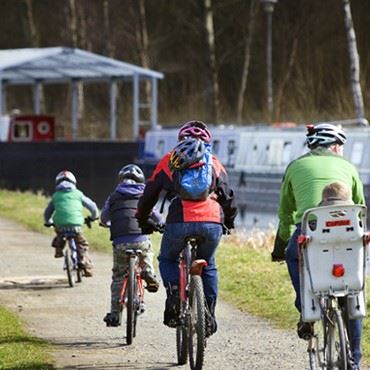